What Parents Should Know about Fifth Disease

Fifth disease is a relatively mild viral infection that tends to occur most often in conjunction with a skin rash that is triggered by some other illness. This disease most often affects children between the range of five to fifteen years of age. It is very easily spread through touch, sinus discharge, the sharing of utensils, or by coming in contact with blood of the infected person. Adults may also succumb to fifth disease if they don’t have prior immunity. Fifth disease is also colloquially known as slapped cheek syndrome, for the distinctive redness that appears on the faces of infected people. 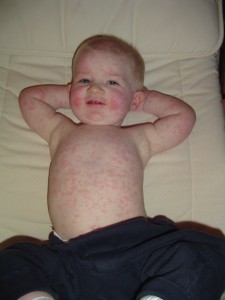 Even though they may be infected, children usually take between four to fourteen days to show any symptoms of fifth disease. They are very contagious at this point. Early on, some symptoms might range from a fever, sore throat, redness of the eyes, paleness, headaches, and fatigue or weakness. This usually advances to the next stage, where a red rash spreads from the face to the torso and limbs. The rash typically lasts for several days. In some cases, it may also be itchy. Once these symptoms are well underway, the risk of contagion is minimal. People who already suffer from immune deficiencies or illnesses, such as sickle-cell disease, can experience elevated anemia. While fifth disease is considered relatively mild in most people, it is dangerous in pregnant women as it could affect the health of the fetus and even lead to miscarriage, especially in later months. Of all infected people, around twenty percent, on average, do not show any symptoms of this disease. Even so, they are still contagious and can affect others around them.

The human parvovirus B19 causes fifth disease. It is important to note that this is not to be confused with the parvovirus that infects domestic animals. Humans cannot get sick from household pets that have parvovirus and vice versa. Fifth disease tends to occur more often in the colder months and can break out quickly in schools, nurseries, children’s camps, and other settings where a large number of children are in close contact everyday. In these situations, adults such as teachers or caregivers can also be infected.

If you suspect fifth disease based on your child’s symptoms, it is highly advisable to consult the family’s pediatrician as soon as possible. The doctor will make a diagnosis based on a physical examination and a review of the child’s medical history. In some cases, a blood test may also be required. Make sure not to medicate the child before allowing them to be properly examined by the doctor.

Fifth disease is a viral illness and, while there is no specific cure, there are treatments to help cope with the symptoms. Do not give your child any medication without first seeking the doctor’s advice. They will take into consideration the child’s age, medical history, progression of the illness, and any allergies to medications. A simple but effective treatment is to ensure that the child drinks plenty of fluids. This can include water, natural fruit or vegetable juice, and soups. If the doctor approves it, the child may also receive acetaminophens to bring down the fever. Keeping the child out of direct sunlight can also help prevent further inflammation of the rash. If the child suffers from anemia or similar illnesses, they may require blood transfusions at the hospital. Infected pregnant women should have an ultrasound, and perhaps a fetal blood test performed, to determine whether the fetus requires a blood transfusion or other care.

Preventing the Spread of Fifth Disease

Practicing strong hygiene habits at home and while in public places is an excellent way to stay safe from fifth disease. Teach children the importance of washing their hands properly, and not sharing their utensils at school or during play. Be vigilant to any symptoms they might display. If they show any signs of fifth disease, don’t let them attend school. It is also a good idea to talk to the school’s health department and find out about their procedures in the case of an outbreak of fifth disease. Remember that once a person has had fifth disease, they develop immunity to it, and are not likely to get it again.

Posted by Jennifer | in Health | No Comments »